I recently wrote a post about going to Washington, D.C. titled My Political Education. I meant it to be a humorous take on a particular trip to our nation’s capitol when I was 17. A strange thing happened as I wrote the story, though. As I write, I glance at the suggested tags. I do this partially as a distraction and to see what the artificial intelligence thinks is relevant to my writing. I was three or four paragraphs in when I noticed something odd in the suggestions. For the post about a trip to D.C. one of the suggestions was “penis.” 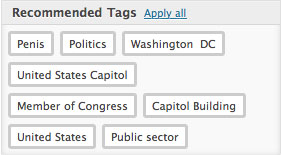 I have no idea why.

It was nestled in with Politics, United States, Public Sector, and other things that made, you know, sense. I stopped writing the moment I saw it. I did not wrote about Anthony Weiner, so it seemed a strange suggestion and I had no idea why it was included. I unconsciously hummed “Which of These Things Doesn’t Belong” as I considered that it might be a bigger issue inside the Beltway than I realized.

It got me thinking about men in general. We have this weird dichotomy where we simultaneously want to (usually subconsciously) brag about our male parts somehow while also pretending they don’t occupy as large a portion of our thoughts as they do. Call it the Male Dichanatomy. We are expected to be proud, but also ashamed of the very thing that makes us men.

It starts from an early age. When I was younger, my mom once bought me a pair of pants that was a bit tight in the crotch. When I informed her that they were uncomfortable, she said, “Well, we’ll just have to let them out to make room for your anatomy.” This was from the woman who taught me the proper names for everything and expected me to use them.

As we age, men are taught to basically pretend our, ahem, anatomy doesn’t exist. Please understand I’m not advocating for either, but look at the different reaction a fully frontal nude woman gets in a movie versus a naked man. Society expected one and seems repulsed by the other.

But back to that suggestion. Are men in Washington dropping their pants for anything? I almost laugh that a congressman tweets a pic of himself across the internet and first completely denies it, then admits it (but still acts surprised that people found out).  Hey, Congressman, it’s the internet. It’s public. Even though it’s one letter off from the region you tweeted, you should have known it would leak out (pun intended).

I’m reminded of my nephew. Once, when he was three, he stood in my living room. With no warning or reason, yanked his pants down, thrust his hips forward, and laughed. Of course, everyone turned and looked at him. His demeanor completely changed and he screamed, “Stop looking at it!” He kept repeating that as he ran around. Know what he didn’t do? Pull his pants up.

I do know this: men underestimate how much it can control us, and women completely misunderstand. As an example I share this true story about my wife and my son (who will surely hate me for this when he’s older).

Like ever other male toddler ever, our son has the occasional habit of, um, exploring in the bathtub. This baffles and horrifies my wife, who never had brothers and just doesn’t understand boys. TO prove it, here is our conversation on the subject.

“But I don’t want him doing that.”

“I understand, and it is a good idea to discourage it somewhat, but you also might as well ask the sky to stop being blue.”

“But it bothers me. I’ll just try to distract him with a better toy.”

“Honey,” I said as I shook my head in disbelief, “There is no better toy.”

Fun fact: that was the original end of this story, but something far weirder presented itself.  As I wrote this and again mentioned Washington, D.C., politics, Anthony Weiner, and the word “penis,” the recommended tags didn’t contain the word I expected. Instead, it had something far stranger: “Sarah Palin.” I have no idea. I think  I’ll just go lie down for a while. I really don’t want to know. 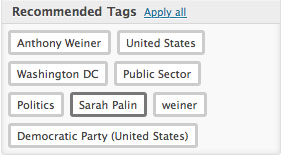 I have less idea why.

I could be considered a true Renaissance Man after having a long and storied (seriously, people actually tell stories about it) college experience and varied careers. I am also a shameless self-promoter (who did you think was writing this anyway?) who is prone to flights of fancy, an abundance of passion on any given subject, ,obsessive behavior, spontaneous storytelling (whether anyone listens or not), and making parenthetical references. I would also be thrilled if I heard someone use the word "raconteur" to describe me.
View all posts by leighton →
This entry was posted in Stories and tagged anatomy, Anthony Weiner, penis, postaweek2011, Washington DC. Bookmark the permalink.