In 2003 I got one of those no-way-you-turn-it-down kind of opportunities one Saturday morning. I got off the phone and realized I accepted without first checking with Chrisie. This could have been very bad, but fortunately, once I told her what I would get to do, she was cool with it (she knew how important to me it was). I changed clothes quickly, barely able to contain my excitement. I was soon going to do something I had long dreamed of. I was going to pet a real tiger.

They are MUCH bigger than you think.

I got the opportunity thanks to a new friend with a mutual affection for movies. One day, a few weeks before that Saturday, we discussed Manhunter (the first film adaptation featuring one Hannibal Lecter). I described my favorite scene where a blind woman played by Joan Allen pets a tiger that was sedated for dental work. I expressed how dearly I would love to feel a tiger’s fur in my hands.

It turned out that his previous next door neighbor had big cats. Tigers and lions. My friend spoke of hearing them roar in the night and helping out occasionally.

“Would you like to go back up there with me sometime?”

“No, just lions and tigers.”

“I will happily take two out of three. I’d love to go sometime.”

I didn’t really think much about it after that. I figured it was the type of offer that wouldn’t really come true. I was ecstatic to be wrong about that. Before I got off the phone the Saturday we made the trip, my friend warned me, “You may have to do some work.”

“I just wanted you to know you might have to work.” As if that would keep me away.

On the ride up to our neighboring state (okay, actually it’s a commonwealth, so geography nerds don’t need to correct me), I fidgeted incessantly. I immediately craned my neck for a glimpse of the big cats as we pulled in the drive (which I couldn’t see since they were safely behind the house).

I jumped from the van before it stopped moving, then sheepishly waited for my benefactor to introduce me. We walked together up to the large pens. I got worried because although I counted three lions, there were no tigers in sight. Lions are majestic and cool and all, but tigers have, uh, stripes. I like tigers, okay?

A man working on the pens quelled my fears when he told us the tiger (named Hemsa) was on his way back. Even better, he travelled with his new cub, Lola. I attempted to contain my glee enough to not startle all around me.

I did have to work as it turned out. We sweated in the morning sun adding plywood across the metal separating Hemsa’s pen from a neighboring lion’s pen.

“Why are we doing this?” I asked at one point as we waited for the next sheet of plywood.

“To make sure they can’t see each other. Lions and tigers don’t mix well. They hate each other.”

“So how do you get ligers then?” He looked at me with a mixture of pity and knowledge that I was clearly an idiot.

We finished the job just as a huge pickup hauling a cage pulled inside the perimeter fence. Out stepped my new personal hero. He looked exactly like Santa Claus dressed in overalls and had the biggest pistol I ever personally laid eyes on strapped to his leg. Introductions were made and he sent the children outside the perimeter fence and secured it behind them.

As the workers debated the best way to get Hemsa from his cage to his pen we were reminded about safety.

“If Hemsa gets loose, whatever you do, do not turn your back on him.”

“Why not?” I stupidly asked, “What will happen.”

They all finally decided the best way was to back the truck up as close as possible to the pen then lift the gate of the cage up. This left a few inches between the cage and the pen, but it was a necessary risk. We needed to get Hemsa in his pen before he noticed the lions. As we got set, I started thinking. Perimeter fence. Mobile cage backed up to a pen. Workers coaxing a large animal from the mobile unit to the permanent one. A dangerous animal. Yep, I was living out the opening scene of Jurassic Park. I chose not to point this out to anyone.

Only bigger and angrier.

My job was to help brace the cage (with my body) against the cab of the truck so it couldn’t move back enough to let Hemsa escape. This put my head about a foot from Hemsa’s, which is where it was when he saw the lions. I’ve had cats (the small kind) for a long time, so I know how they act when they are mad. Hemsa was mad. He flattened his ears and let out a low growl that vibrated my bones. I’d seen cats do this before with hissing instead of a growl, but never with teeth the size of half my face. I gulped and braced the cage harder.

They couldn’t coax Hemsa from the cage so someone suggested spraying a fire extinguisher to startle him in to the pen. I was about to ask if that was really a good idea when they went ahead and did it. I learned the true power of a 900 pound tiger leaping. The cage bucked against us, but we somehow managed to hold it and Hemsa was safe in his pen. 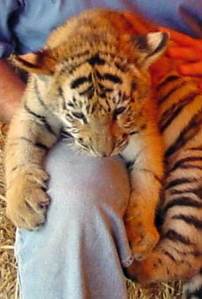 We finished up and then they brought out Lola. Kittens are cute. Tiger cubs are adorable. She was small enough to easily control so she got to frolic outside the pens for a while. We played with her for several minutes. She acted just like an oversized kitten. Well, she acted that way unless I turned my back on her. When I did, she turned all tiger and pounced to take me down. That’s right, I was attacked by a tiger and live to tell about it. The better news came when most of the group needed to leave to get back a rogue llama. This meant a very few of us got to stay behind and keep watch on Lola. This was a responsibility we took very seriously and in now way used to our advantage to play with a tiger cub. The play only ended when Lola and I both fell asleep in the hay.

All too soon, the day came to an end and I had to bid farewell to Hemsa, Lola, and Judah (the only lion’s name I still remember). I was lucky enough to live out a seemingly unobtainable fantasy. I know I have a lot of bragging rights just from the day, but I made sure I did one other thing to cement them. Twice during they day, once with Lola and once with Hemse (which was quite a bit scarier), I grabbed a small part of each of their paws. It was important because now I can say that I have literally caught a tiger by his (or her) toe.

Yes, I slept beside a tiger. Envy me.

I could be considered a true Renaissance Man after having a long and storied (seriously, people actually tell stories about it) college experience and varied careers. I am also a shameless self-promoter (who did you think was writing this anyway?) who is prone to flights of fancy, an abundance of passion on any given subject, ,obsessive behavior, spontaneous storytelling (whether anyone listens or not), and making parenthetical references. I would also be thrilled if I heard someone use the word "raconteur" to describe me.
View all posts by leighton →
This entry was posted in Stories and tagged dreams come true, excitement, exotic animals, Jurassic Park, Lion, once in a lifetime, postaweek2011, Tiger, tiger cub, work. Bookmark the permalink.

1 Response to Catch a Tiger